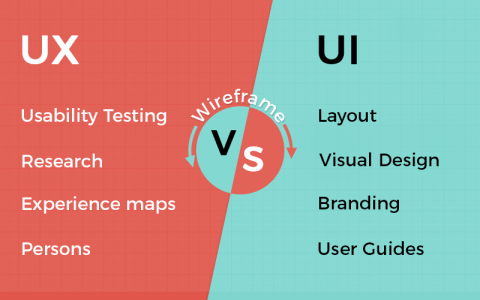 What is the difference between UI and UX Designer

UI (User Interface) – user interface. This term refers to the space in which communication occurs between the machine and the user. These are all the elements of a given device, application, system, software that allow the user to "control" it.

We can divide into two most popular types:

– graphical (GUI) – graphical user interface. It consists of graphical elements such as buttons, text boxes, controls (switches) and many others.

The user, using a mouse or touchscreen, communicates with the software by touching the relevant components and responding to their changes. It is by far the most popular and widely used type of software communication resulting from the fact that most people are so-called visual learners.

Features of a good UI:

UX (User Experience) – user-centered design. UX focuses on designing products or services in such a way that they achieve their intended purpose and are easy to use, simple, functional, ergonomic. Main applications are: computer software, websites, mobile applications. Also used in many other fields and types of products.

UX is the most important element of any program, website, mobile application. Well-applied UX causes the user to use the product over and over again. Incorrectly applied UX, or lack thereof, will cause you to immediately uninstall the application and look for another one. It doesn't matter how good features your app contains if it has a poor UX. Poor UX nothing can save – practice shows so.

3. What is the difference between UX and UI designer?

UI Designer focuses on the visual aspects of the product. Its task is to design the user interface so that it is attractive to the user.

UX Designer focuses on the user experience of the product. It is user-centered. It can be said that it advocates for the user and makes sure that the user's use of the product is as simple and intuitive as possible.

UX and UI Designer are significantly different, while in any project they should work together, as UI and UX are now inseparable concepts. Good UI does not exist without good UX. If we want our product to achieve the goals we have set, we must not save on either UI or UX.

As simply as I can confirm the above thesis? Ask yourself and give an honest answer: what do I do with the applications downloaded from Google Play or Apple AppStore moments after they are installed and turned on for the first time, if the first impression is negative or indifferent?